In the early 1980s, The Greenbrier Companies’ headquarters was in a modest, blue Victorian house in Oregon City, Oregon, with eight office employees. Fast forward to 2018 and Greenbrier, a leading international supplier of rail equipment and services, has produced over 100,000 intermodal cars, employs over 14,500 people across eight countries, and manages railcars equal to nearly 20% of the North American fleet. In the mid-1980s, an innovation from Greenbrier gave rise to a product that would increase transportation capacity while reducing operating costs. In 1984, the Twin-Stack® intermodal railcar was introduced. 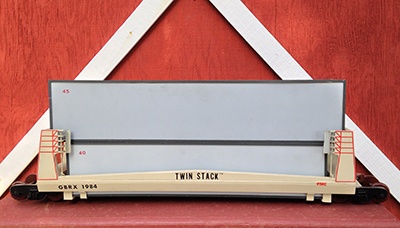 When Bill Furman, Greenbrier CEO, and Bob Yates, VP Intermodal Automotive, started the road tour at SeaLand with their makeshift wooden Twin-Stack® prototype, they were aware that strict clearance laws would present marketing obstacles. Stacked, the containers pushed the limits of tunnel clearance on the East Coast, so the perception at the time was that these cars would only gain notice from a niche market.

Convinced that the Twin-Stack® offered a breakthrough opportunity in freight movement, Furman and Yates prepared to meet with every level of the industry. They made the economic argument that since there can only be 120 trailers per train, adding another container on top would easily transport over 200 units with no extra cost to crews. This would result in an estimated 35% reduction in operating costs. SeaLand was convinced, and the first double stack order was placed. Shortly after, Southern Pacific and Burlington Northern also ordered cars, totaling 1,500 manufacturing orders. 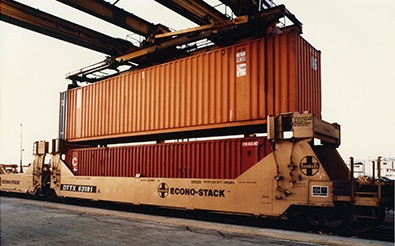 International trade grew substantially from the mid-80s to -90s, increasing the need for intermodal cars that could transition from ships, to trains, to trucks. Trade deals between the U.S. and Asia revolutionized ocean routes and prompted the reconstruction of the Panama Canal. It took decades of hard work and negotiation, but changes in the international marketplace eventually led to changes in the domestic trade routes, including improved clearance through rail tunnels. Today, nearly 100% of the tunnels throughout the North American rail network have double stack clearance and intermodal railcars are used for nearly 70% of all U.S. shipments.

Greenbrier has come a long way from the days at the blue house. What started as a single product in the rail market has expanded to include 13 additional designs as well as marine barges. Creative solutions such as the Twin-Stack® has made Greenbrier an international driver in the rail industry that has a well-earned reputation for innovation. 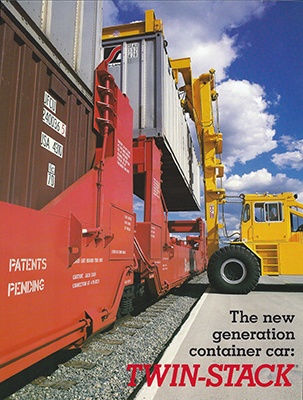