In recognition of Veterans Day on November 11 and the Marine Corps birthday on November 10, Greenbrier thanks its employees who have served in the United States military. 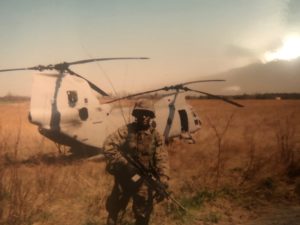 Every year, the Marines gather on November 10 for the annual Marine Corps Ball in honor of its birthday. They dress in their finest uniforms–the dress blues–and bring their significant others to celebrate the rich history that has protected the United States – even before it became a nation.

In the Marine’s 246-year-long history, they have been involved in every U.S. conflict from the American Revolution to the Global War on Terror. The group holds a reputation for expert marksmanship.

During the war of 1812, the British invaded Washington and set fire to the U.S. Capitol and the White House, among other landmarks. However, Marines from the barracks held back the British in Maryland, delaying the enemy’s advance into the Capital for two hours (National Park Service). The British also captured the Marine Corps barracks, but they did not burn the barracks or the Commandant’s house. Today, the buildings in the barracks are some of the oldest in Washington.

The Few, The Proud

At any given time, there is only an average of 175,000 Marines on active duty. Compared to the 500,000 active-duty Army members, the Marines represent the title “The Few, The Proud.”

The title “Marine” is earned and not given to just anyone. One who earns this title will forever call themselves a United States Marine, not a soldier, not an ex-Marine, but known as only a Marine! 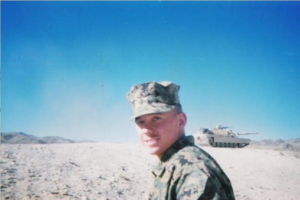 Greenbrier is proud to spotlight employee Andy Roberts, a hardworking colleague, a dedicated father and the world’s biggest fan of the movie Predator. He is also an integral member of the Greenbrier family, starting at the company in 2007 and a few years later, becoming a supervisor of a large tank car maintenance shop and more than 50 people. Now, Andy serves our Greenbrier Management Services business as a senior field inspector. After active duty in the Marines from 2002 to 2006, Andy’s first job was as a welder at GRS Cleburne. Andy was in the inactive reserve from 2006 to 2010.

In an interview recognizing Veterans Day and the Marine Corps, Andy discusses his decision to join the military, what he appreciates most about his time with the Marines and how it has served his career at Greenbrier.

“I joined because I’ve always had an interest. It sounds silly, but the movie Predator with Arnold Schwarzenegger was one of the reasons I became interested when I was very young. I wanted to do something similar with special ops. The Marines seemed to match my interests best. It’s the longest and hardest boot camp and most elite group.”

When Andy left the Marines, he saw many welding opportunities in Texas and decided to attend welding school. He started with Greenbrier in Cleburne to get real-world experience and didn’t expect to stay long, but it’s been 15 years and he has made a great career out of his journey at Greenbrier.

“You have a lot more discipline to be on time after being in the military, which is important in the manufacturing sector. Manufacturing, like the military, sets you up to be under a lot of supervision because of the nature of the work. Railcar maintenance shops are particularly demanding. The military also trained me to be detail oriented. This has been helpful since I’m now an inspector and my job relies so heavily on attention to detail.”

“My parents always knew I would join. My nickname from my friends and classmates was Ando-Commando because I was so into the military from such a young age. My mom worried but she had years to prepare.”

Andy’s dad wanted him to attend college first and become an officer, but Andy knew he wasn’t college-bound right away: “If you aren’t sure what to do, the military is the best thing to get started. You get exposed to so many different jobs in the military and can learn more about what you care about. Then, you obtain lots of applicable skills, get school paid for afterward and can make great money when you are out of the military. You’re more mature if you wait and go to college later. I think everyone who is mentally and physically fit should serve two years in a branch of the military.”

“I don’t really remember enlisting. It’s mostly paperwork. When it really hits you is when you meet your recruiter and say goodbye to family and friends. My recruiter drove me from home to Dallas and put me in a hotel the day before flying to San Diego for boot camp. He gave me a six-pack of beer for my ‘last night of freedom,’ knowing the next 13 weeks were going to push me harder than ever before.”

Andy explained that the purpose of boot camp is to break recruits down and then build them back up. The Marines’ boot camp is the longest – 13 weeks instead of six to eight for other branches. It also filters out the individuals who are truly meant to be in the Marines from those who are not: “The first two weeks were horrible. I thought about quitting but I remembered I had wanted this my whole life. That’s who the Marines want – the ones who are truly dedicated and will take care of their teammates.”

“I had done so much research that it was very similar to what I expected. There are a lot of politics involved and it’s not what the movies show you. The military is a great career path, but it all depends on where you end up being placed.”

In his lifelong research about the military, Andy joined the infantry, a small subset of the Marines that specializes in combat. However, recruits don’t get to select their exact position, so Andy became a combat instructor in Virginia and never went overseas. He had never seen live combat, so Andy had to start learning from the ground, up. He trained with many special forces and became an esteemed combat instructor over the next four years. “In hindsight, I know I was lucky that I never went overseas to serve on the ground, but it wasn’t what I expected when I joined the Marines.”

“The comradery with others in my unit. When you go through all of this, you form a bond unlike any other.”

“People think all kinds of crazy things about the Marines. We have quite the reputation around the world as well, particularly due to being experts in marksmanship.  In reality, all branches of the military work together to protect the country, depending on the mission. The Marines is just more specialized for certain missions.” 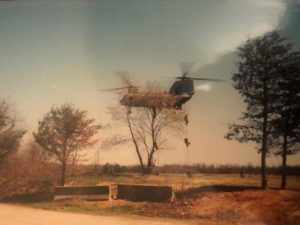 “I have just returned from visiting the Marines at their front, and there is not a finer fighting organization in the world,” Douglas Macarthur, General United States Army World War II

“Some people spend an entire lifetime wondering if they made a difference in the world. But Marines don’t have that problem,” Ronald Reagan, President

“The Marines gave me a really strong sense of discipline and a work ethic that kicks in at my job,” Drew Carey, Actor, Television Host and Comedian

“The Marine Corps has just been called by the New York Times, ‘the elite of this country. I think it is the elite of this world,” William Halsey Jr, Fleet Admiral United States Navy World War II 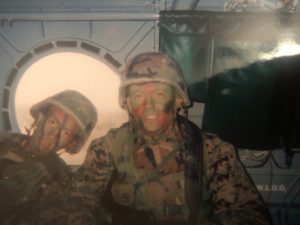